It’s another week and another Hitch here at Weekly Hitch. This is a blog-type project in which I watch all of Alfred Hitchcock’s movies, in chronological order, and then dissect them like a frog in a high school biology class – except, unlike the frog – the movies will live on forever.

This week, my 14th on the project, brings us to the much derided and curiously uneven crime thrillerish sort-of-comedy Number 17. So, welcome, and let’s begin.

It’s been three days since I watched Number 17, and to be honest – I’ve still no idea what I think of this picture, so this ought to make for an interesting post. But we proceed all the same. 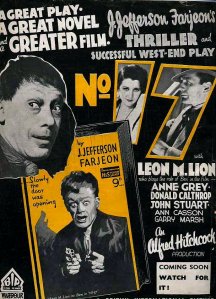 Number 17 begins with the wind, and a hat. A man’s hat is blown off in a blustery fall wind and the man chases it down (in a rather lovely tracking shot), finally catching it outside a mysterious house that seems to be up for sale… it’s Number 17.

Looking inside, the man – who we will come to know as Forsythe (played by John Stuart – who we last in The Pleasure Garden back at week 1) – discovers two things; a dead body and a lurking cockney weirdo named Ben (played by theatre producer and actor Leon M. Lion) who claims to know nothing about the corpse.

Ben and Forsythe – the dynamic duo.

Creepy Ben searches the body and finds a gun and handcuffs. He takes the gun, but leaves the cuffs. Things are getting mysterious. Soon, after Forsythe interrogates Ben for the length of a bible, a noise on the roof leads to a woman falling through a skylight – and falling unconscious onto Ben and Forsythe.

The woman wakes up moments later, calling out for her father – whom she was looking for on the roof. It seems that the woman, called Miss Ackroyd (played by Ann Casson) found a telegram that her father received, which read as follows:

The girl’s father, a policeman, was looking for a stolen necklace taken by a man called Sheldrake – which another detective by the name of Barton had traced to the house next door to the Ackroyd’s. So the girl’s father ventured out on the roof to investigate Number 17, and went missing!

And her father isn’t the only one missing, because when Forsythe and Ben and the girl go out to look at the dead body, it’s gone! But, luckily for our story – no sooner has the body vanished than three strafers soon appear.

Claiming to be looking at the house for sale (in spite of it being midnight), the three – a sinister man, a mute woman named Nora, and a henchman – but Ben isn’t buying their story and pulls the gun on them, which soon gets taken away  by the sinister man. The new arrivals search Ben and Forsythe and the girl, discovering the telegram to her father – and they seem to know something about it!

Okay, this is getting a bit confusing, so we’ll just hurry through the rest. The gang’s leader, Sheldrake, shows up to retrieve this diamond necklace that everyone’s after (he’d hidden it in the toilet tank), but Ben pickpockets it off him. Then the dead body reappears, alive – and is revealed to be the girl’s missing father, there’s a struggle or two and the gang of villains run off to catch a train and escape with the loot.

Ben and the girl and Forsythe all run after them (after being helped by the Mute Nora, who turns out not to be mute for some reason), and there’s a chase between some villains on a train and a fight on the bus – both vehicle filmed using models, and not great ones. In the end, Forsythe is revealed to, in fact, be police detective Barton, the very one who sent the telegram to miss Ackroyd’s father, the villains are defeated, and Ben returns the necklace which he had on him during the whole chase and everything. It’s kind of a mess.

What the sweet heck is going on here?

That’s basically the main question surrounding Number 17, not just the question being asked by the characters in the movie, but unfortunately by the audience as well.

Number 17 has a reputation as far as Hitchcock films go as being possibly the absolute worst of the bunch, and because of this I’d never bothered to watch it up until now – and now, after the fact, I have to say that it’s not as bad as I expected… but it is pretty dreadful. 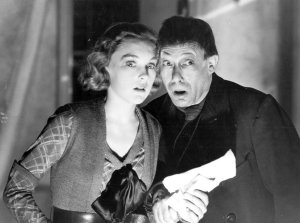 This is what we’re dealing with.

I think, however, that Hitchcock knew it was all terrible nonsense – because in his interview with Truffaut he comments on how he tried, within the confines of the story he was assigned (more on that later), to essentially make a ‘spoof’ of the thriller genre – as it had been at this point. Basically, Hitch knew what an awfully contrived and formulaic thriller he had on his hands, so he tried to turn it into a spoof on contrived thrillers, and fell flat.

But that’s not to say that there aren’t a few good things in here. Hitch does well with what is effectively a ‘haunted house’ type story for the first half – something that would serve him well in Psycho. There is some interesting, if totally unbelievable, model work in the final reel which shows a train and a bus nearly colliding (trains would become a fixture for Hitch in films like North By Northwest and The Lady Vanishes). And there’s also a really well staged fight scene between some guy and some other guy (I couldn’t keep them straight by that point) – in which Hitch does some neat frame ramping and sped up punches and such.

On the down-side, however, there is pretty much everything else. The performances are either stock and dull or, especially in the case of Leon M. Lion as the “hilarious” and “amusing” cockney comic relief, Ben, absolutely horrible. Every time this twerp mugs at the camera or makes some remark I wanted to push him down some stairs. The actress playing the daughter was fairly good, but often undercut by the dumb or unfunny men.

Mercifully the film is only 68 minutes long, and so what could have been a lengthy punishment was delivered as a swift execution.

Number 17, began life – in Hitch’s hands – as a completely different project called London Wall. Hitchcock was assigned London Wall, as a follow up to Rich and Strange by BIP’s head of production Walter Mycroft. However, as soon as Mycroft saw that Hitchcock was interested in the project, he decided to put Hitch in his place by taking him off the wall, and reassigning him to Number 17.

Based on a popular London stage play, Number 17 was not a critical hit on the stage – but it was popular, and its producer and actor Leon M. Lion brokered a deal between British International and the plays author which saw Hitchcock adapting the play with Rodney Ackland, and required the casting Lion in the role of Ben the cockney.

Waving down a bus – possibly for comedy.

Hitchcock, like I said before, seemed well aware of the plays horrible contrivances and coincidences – and so decided the turn the semi-serious thriller into a completely un-serious comic spoof of the thriller genre… but as we know, that wound up not working out so well.

By this time, Hitch had made a small, but unmistakable, string of failures for British International, and while those less-than stellar pictures had left Hitchcock on the wrong side of Walter Mycroft, it seems the John Maxwell’s insistence on only producing bankable stage adaptations with low-budgets was making Hitch feel restless and under appreciated. 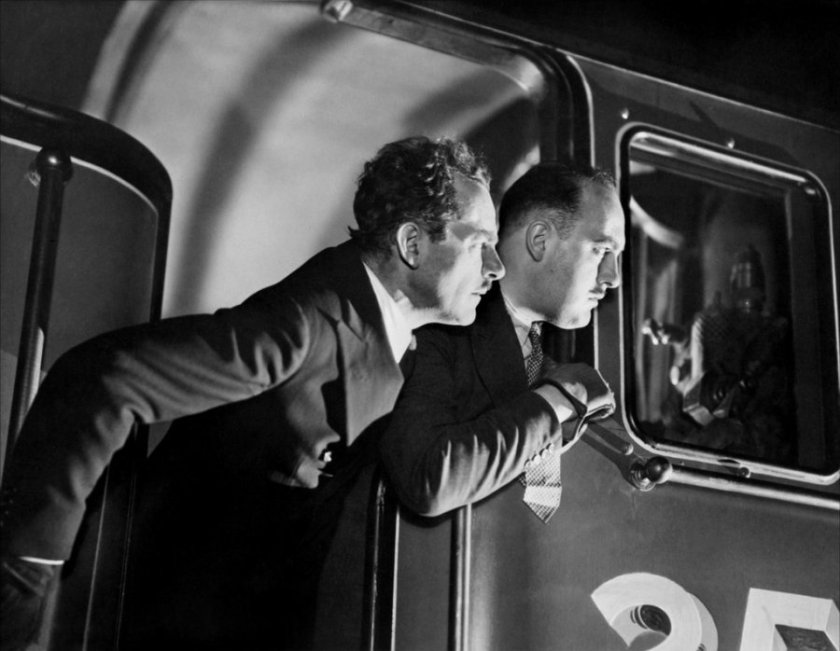 So, with all these factors at play, and subject to a couple post-scripts and addendums, Number 17 would end up being Hitchcock’s last film as a director for BIP. He would be assigned to oversee and produce a number of features in order to fill out his contract – but only one would actually get filmed as a Hitchcock production.

Number 17 opened to pretty bad reviews all around, and the film would go one to be ranked as, debatably, the worst of Hitch’s projects for BIP – and with the cancellation of his contract in late summer of ’32, Hitchcock – Britain’s best director – would find himself unemployed.

As far as films go, Number 17 is both a terribly unimportant entry in Hitchcock’s diary, and at the same time incredibly pivotal.

This film, while being awful and confusing (and even though Hitch clearly and almost self-admittedly didn’t care about the project), is the launching off point for something amazing just around the corner. Hitch finished 1932 out of a job, and burnt his bridges at BIP so effectively that Elstreet Studios would be out of bounds for the remainder of his time in Britain – and that left him with few options when it came to directing.

About this time, Hitchcock started looking toward Hollywood – far sooner than he would later admit. He had talked briefly with Universal around this time, but that fell through – and that’s when his first boss in film, Michael Balcon of Gainsborough would come back into Hitch’s life with Gaumont-British Pictures, and give Hitch an opportunity to reinvent himself and set his course toward the greatness we know today.

When it comes to Number 17 itself, and on its own, the movie is not really all that important to Hitch’s legacy and future. The picture does, however, offer us the first solid example of Hitchcock using what he would call “the MacGuffin.”

Cockney Ben and the MacGuffin.

The MacGuffin, which will become almost the most important aspect of Hitch’s work, is basically just ‘the thing that the characters in the movie care about’ – it’s the microfilm, the secret tune, the message, the Maltese falcon, the briefcase in Pulp Fiction, the whatever. The MacGuffin is important to the characters, while simultaneously not really nattering at all to the audience. It’s just an excuse to have people go chase a thing, and for Number 17, the MacGuffin is the necklace. Everyone’s after it, and it doesn’t matter in the least.

I’m sure I’ll talk more about the MacGuffin in the future – but for now I guess it’s enough to know that Hitch had found it, and like everything that Hitch finds and sees value in – he will keep it and use again and again and again.

So for now, we mercifully move away from Number 17 and toward Hitchcock’s last movie before a whole new chapter begins, 1934’s Waltzes From Vienna.